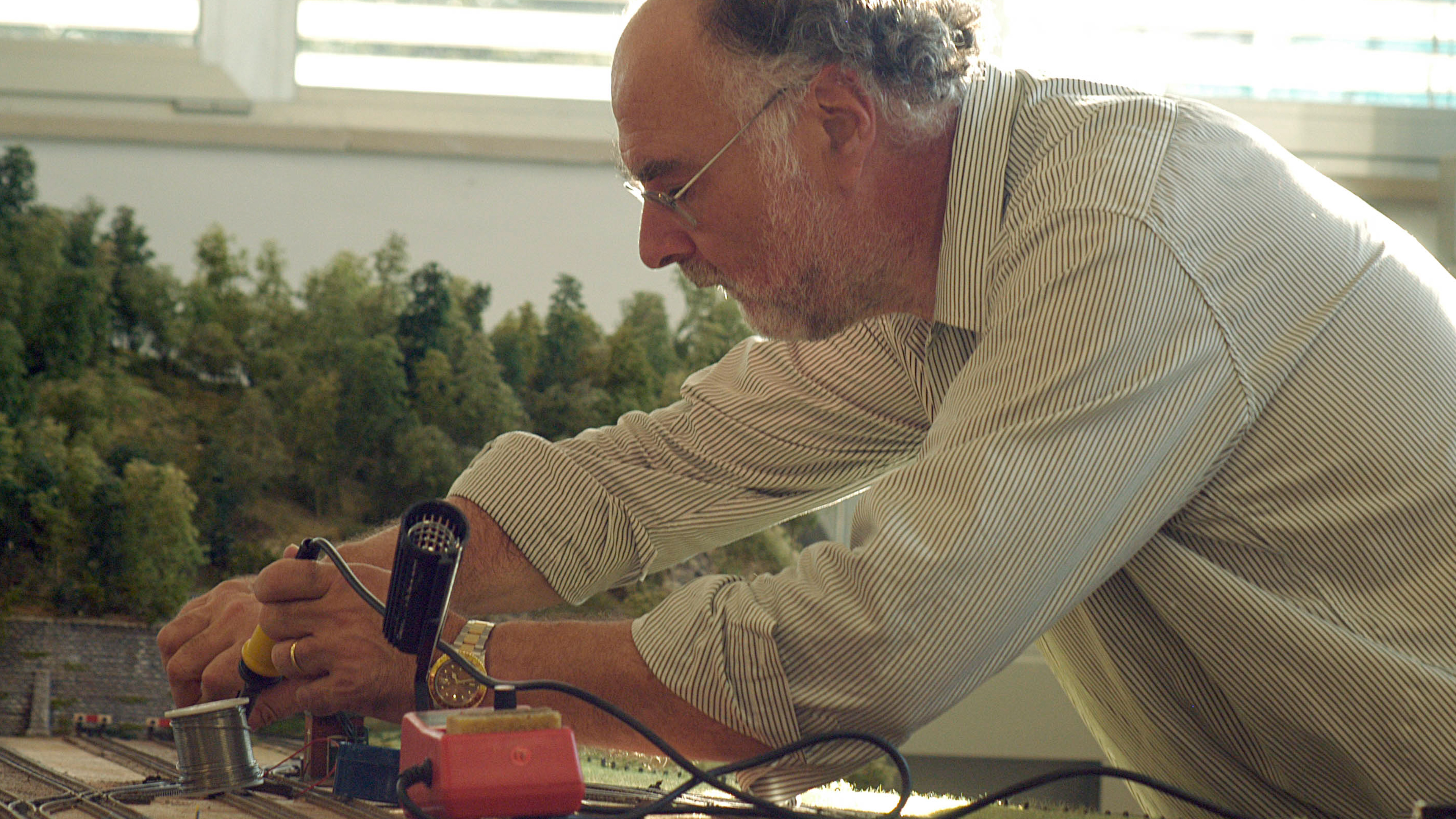 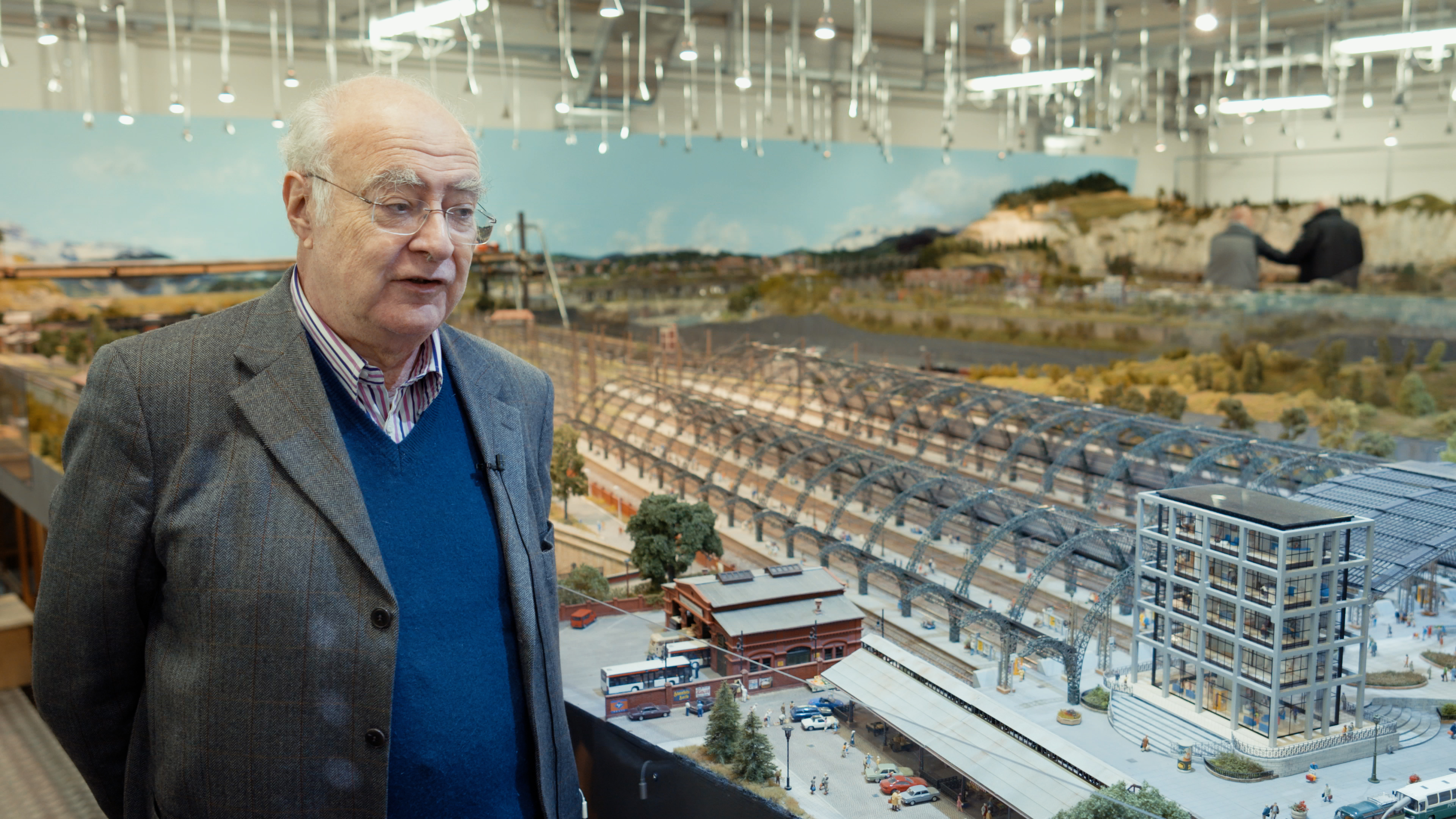 Various figures, both technical and creative, have joined the founder in the work of conception, construction and management of the model railway over time, all moved by infinite passion and dedication.

He has collaborated on the San Giuliano railway model project since 5 May 2005 as a landscapist, handling the designing and planning of the natural and urban settings.

Until 2016 he worked as a commercial agent. In the early 1980s, together with Sergio Ferrari, he co-founded a railway modelling group called GMFF (Group of Model Makers of the Florentine Railway and Friends of the Railway) with its headquarters at the former Leopolda Station, Florence. The birth of the Group was communicated with a promotional letter delivered to all the modelling shops in the city to be distributed to customers.

«My first model train was the oval V200 Märklin. My father bought it for me at the Casa dei Balocchi, the toyshop that was in Via del Proconsolo in Florence. I played with it, using newspapers and shoeboxes to build mountains and tunnels for the toy trains to pass through».

For many years an Italian Navy officer and electronics engineer, a long-time model railway enthusiast, at a reception he met his friend Giuseppe Paternò di San Giuliano and told him that he had had to dismantle his model railway and informed him that he would have to do the same with his own. In 2001 they agreed to build one together, also involving their friend Vito D’Amico, thus beginning the San Giuliano Model Railway.

«I have always loved Märklin trains. I remember when I was small and the governess would build them with me. I have kept on playing with them and collecting them throughout my life».

He has collaborated on the San Giuliano Model Railway since 5 May 2005, reproducing real natural settings in miniature. Over the years he has created prototypes of rocks, making moulds with silicone rubber and natural latex into which plaster compounds are poured to make the rocks, which are subsequently coloured. With the use of two-component resins he has also created the sea, lakes and rivers on the model layout.

He has been the partner and proprietor of the Il modellismo shop, devoted to the sale of modelling articles in Prato. He has created various dioramas and model railways and in particular he has been co-author of the one in the Circolo DLF in Prato that reproduces the Vaiano-Vernio railway of the Florence-Bologna Direttissima train in 1:87 scale.

«I studied the basic techniques by reading the American magazine Model Railroader, which I bought for the first time as a boy at the newspaper kiosk outside the Misericordia in Piazza Duomo in Florence. My first model train was a Rivarossi, given to me as a present at the age of 10-12 for the Epiphany, but I developed my hand-crafting skills in the third year at primary school when I began to use the coping saw in the carpentry workshops at school».

For the San Giuliano Model Railway he has created bridges, viaducts, embankments, entrances to tunnels, small boats, cargo ships and some buildings, including the Museum and the 16th-Century Castle. All the building works have been gleaned from images and drawings of pre-existing works that were then reproduced in 1:87 scale. The monumental dam in the model layout is inspired by the one at Lake Brasimone and is composed of a plywood structure covered in plaster and then engraved using an awl.

He has worked as a surveyor for the Works Management of the Società Progettazioni Edili Autostradali SPEA Engineering S.p.A. on the works for the Italian motorways (IRI group).

In 1975 he moved to Genoa where he was contacted by publisher and publicist Italo Briano to write in the railway modelling magazine Italmodel Ferrovie (1951-1974), later titled I Treni Oggi (1980-1993) and currently known as I Treni.

He has collaborated in the creation of the model for the Circolo DLF in Prato that reproduces sections of the Direttissima Bologna -Prato.

«Between ‘46 and ‘47 I played on the freight wagons at Pisa San Rossore station with a friend, the son of a railway worker. We had fun applying the brakes on the wagons and once I fell from the braker’s cabin and hurt myself badly. I believe this accident began my passion as a railway model maker».

He worked in the engineering industry until 2008. Through his wife, who collaborated with Giuseppe Paternò di San Giuliano, following his retirement he was contacted to be involved in the creation of the San Giuliano Railway Model as head of construction of the overhead lines for the railway.

«I remember my first model railway. When my big brother was 15-16 years old, he brought one home. It was a Märklin model and he bought it with his first wages. We had fun creating the train routes, making them go right first and then left. Model-making is an expensive hobby, which I have only been able to continue to cultivate through my involvement with the San Giuliano Model Railway. I am very proud of having contributed in a small way to the realisation of this major endeavour».

From 1965 to 2014 he worked as a cinema operator and a film and audio projectionist. Since 2015 he has devoted his energies to the San Giuliano Model Railway, studying the Märklin 3-rail system circulation installation in collaboration with engineer Gino Guerrini.

«Model-making is a passion that you pick up as a child. When I was small and the bombs fell on Florence, I stared at the trains going around in the window of the Duilio modelling shop at number 48 Via del Corso, Florence».